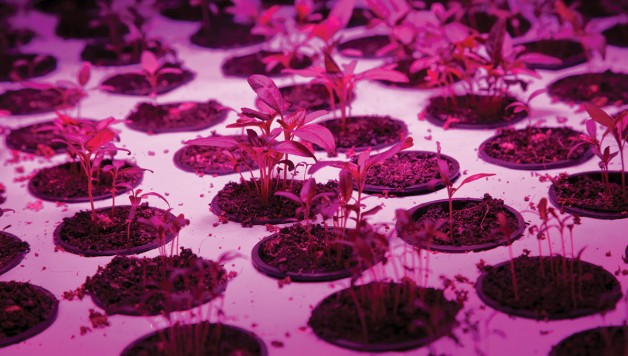 The innovation and advancement of LED lighting technology has brought with it a host of other important benefits. The field of plant growth research has been able to advance substantially due to the advantages that LED lights provide through full spectrum lighting. Plant science and LED lighting technology work hand in hand to discover the most important aspects of plant growth which provides optimal solutions for greenhouse and controlled environment growers.

In controlled growing environments, LED lighting technology is ideal because its effects are able to be closely monitored and adjusted which not only grows healthier plants and maximizes yields, but it also improves operating costs through energy savings. LED lighting technology can also be tailored to meet the spectrum needs of specific plants. This further increases output and delivers the best possible plant yields at a far more efficient level.

In commercial facilities, LED’s can be used as the primary light source, or they can act as supplemental light if the facility is conducive to sunlight exposure as in greenhouses, or glass vertical farms. In controlled environments, LED’s don’t require reflectors like some other forms of lighting, which means that by nature, LED’s are directing their complete output onto the plant itself. Additionally, LED’s are less radiant and therefore can be placed closer to the plant. This type of precision only further adds to the efficiency and sustainability of the complete grow environment.

LED’s are starting to become a leading lighting source choice for vertical farming operations, as controlled environment agriculture becomes more widespread. Because the science and research behind LED’s is now more widely accepted and known, this form of lighting is now further in demand which makes them more viable in consumer markets.

As greater research and communication regarding the specifics of plant growth become more available through awareness, so too will the innovation and technology drive behind horticultural lighting. Like with any new product, it took early adopters to be the risk-takers and test out new forms of grow lighting. This has in large part determined LED lighting technology’s viability today.

As further research unfolds regarding plant science and the specific needs of diverse vegetation types, the technology will advance along with it which indicates a positive future for efficient and safe food production.