One of the greatest threats to North American waterways and water bodies is eutrophication, a process where nutrients from agricultural lands can create large increases of phytoplankton populations. This growth of phytoplankton in turn, sucks out nutrients and oxygen from the water and suffocates or starves any other multicellular organisms in the water. This process has created dead zones from Texas to Maine, along Northern and Southern California coasts, and along the coast of Washington. One of the largest and most ecologically and economically devastating dead zones is in the Gulf of Mexico, near the mouth of the Mississippi River. Feeding into this river’s system from upstream are the Missouri, Ohio, Tennessee, Arkansas, Red, and White Rivers, carrying nitrogen and phosphorous from 31 states, all with vast agricultural land operations. Aside from killing all vegetation and animal life, sometimes within a nearly 5,800 square foot area along the Texas-Louisiana-Mississippi coasts, it reduces revenues for the tourism and fishing industries of the area. 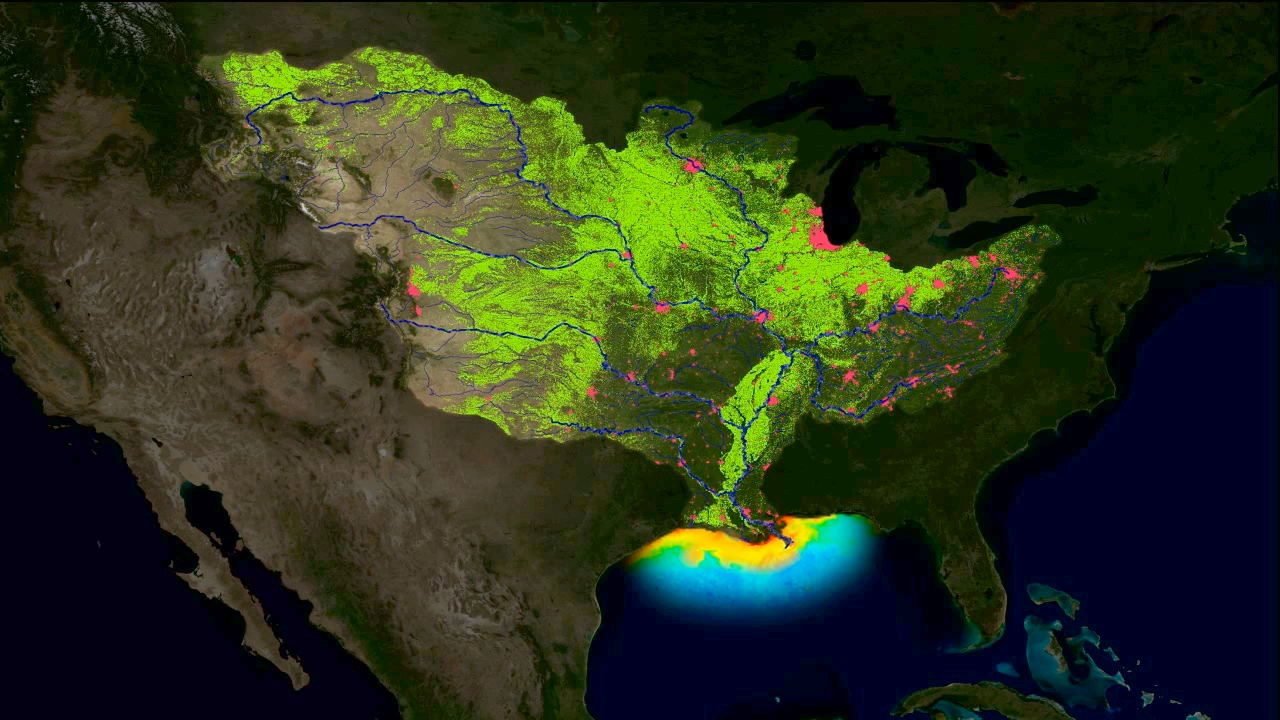 A representation of the Gulf of Mexico’s dead zone. Image via NOAA.

It’s possible that these so called “dead zones” can be reversed. The most well known example is the reversal of the Black Sea’s dead zone, previously the largest in the world. The process took ten years – from 1991 until 2001 – to complete. The reversal was unintentional, mostly due to the collapse of the Soviet Union and command economies of the Central and Eastern European states, which could no longer afford to purchase fertilizers for farming. Now, fishing has returned as a major industry in the area.

There are many different proposed solutions to the Gulf of Mexico’s dead zone problem: cover crops, wetland construction, fertilizer reduction, and so on. However, public funds spent on these investments could be used on a much more effective and ecologically conscious project: subsidizing the conversion of conventional farming along these river valleys to become controlled hydroponic farming operations. Among the many benefits of hydroponic systems, eliminating runoff is one of the most important when relating it to conventional farming. This would reduce water use from five large aquifers along the Mississippi River network, and would completely stop most agricultural runoff from converted farms. With the elimination of nutrient runoff from farms, the Gulf dead zone could be partially reversed, leaving the issues of urban runoff from cities and waste runoff from livestock farms along the river network as an issue.

This single investment could lead to a range of revenue streams to supply future subsidization of organic farm conversions and green infrastructure developments. With the return of a controlled fishing industry that allows aquatic life to rapidly rebound, a boost in tourism to the area, along with a small tax on the increased supply of vegetable output from hydroponic farms that operate year-round and produce higher quality vegetables at a much faster rate, funds can be raised for everything from wetland construction to biogas construction subsidies for livestock farms. Though we have created an environmental disaster around our coasts, smart development, effective use of economic schemes, and updating the United States’ farming infrastructure and practices can greatly restore the health of the dead zone that has nearly enveloped all of the Eastern seaboard and Gulf Coast.Feature Image: The Gulf of Mexico’s dead zone caused by coastline pollution. Image via Rawstory.