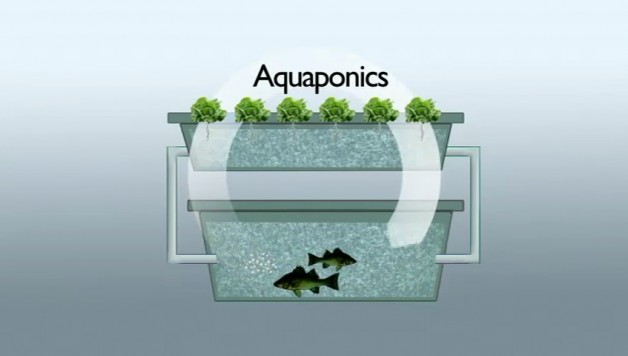 Aquaponics is an ecologically-applied horticultural production technique that is both ancient, used by the Aztecs in their construction of vegetated chinampas floating islands, as well as rapidly emerging in modern times as a biofiltration technique used in combination with commercial recirculating aquaculture systems. Aquaponics draws its name from two of its subsystem components: aquaculture (fish farming) and hydroponics (soilless plant production). Like traditional hydroponics, aquaponics involves growing plants in the absence of soils using instead dissolved nutrients and water circulation. However, in aquaponics, the nutrients are derived primarily from fish waste byproducts, rather than the inorganic soluble nutrient salts used in traditional hydroponics.

Fish excrete ammonia [NH3] through their gills as a nitrogenous waste product. In aquaculture, if ammonia levels are allowed to build up too high, they become toxic to the fish; therefore, regular water changes are required. In aquaponics however, naturally-colonizing beneficial bacteria instead convert this ammoniacal waste into plant-available nitrates [NO3]. The two genera of chemoautotrophic bacteria are Nitrosomonas, which oxidizes ammonia into nitrite [NO2], and Nitrobacter that further oxidizes nitrites into the usable nitrates. These bacterial species are the true workhorses of any aquaponics system, and they require an aerobic surface area on which to colonize in order to perform their crucial jobs effectively. This aerobic surface area is referred to as the biofilter and can consist of any high-surface area-containing media, such as porous lava rock, heat-expanded clay or shale, or a synthetic material. Even though the bacteria are invisible to the naked eye, preventing these biofiltration bacterial populations from crashing is the key to uninterrupted plant growth success in the aquaponics system.

Because the plants remove the nitrates from the water, an aquaponics system theoretically does not require water changes in order to rid the system of the toxic buildup of waste byproducts like ammonia. This makes an aquaponics system extremely water-conscious, conserving up to 90% of the water that would otherwise be utilized in the traditional field production of the same crop. Besides nitrates, most other nutrients required for plant growth are also present in the water solution. Typically the only nutrient additives necessary for a maturely cycling aquaponics system are iron, potassium, and calcium, as the rest of the required nutrients are made available through the small portions of unconsumed fish feed and other fish waste byproducts. Because an aquaponics system should maintain a neutral pH of 7.0 but tends to acidify naturally over time, potassium and calcium are typically added in the forms of the bases potassium hydroxide [KOH] and calcium hydroxide [Ca(OH)2], while chelated iron is typically added in the Fe-DTPA form, which is soluble and plant available under a neutral 7.0 pH.

In the upcoming posts, GreenTowers will further discuss other advantages of using aquaponics in urban agriculture, some expected commercial scale harvestable output quantities, and more about what our company specifically is working on. Cheers until next time, please leave comments or feel free to reach out to us directly with pressing questions!