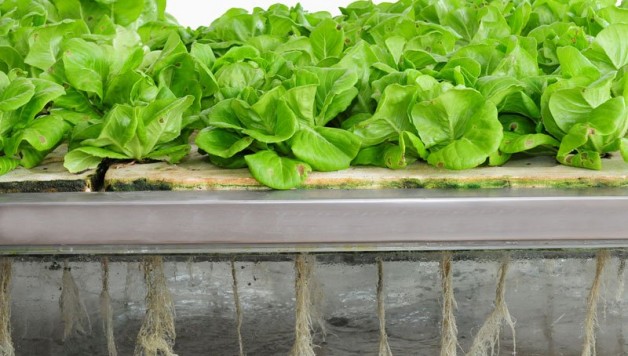 Aeroponic research began in the 1920’s and progressed steadily as a soilless growing method. In the early stages, researchers grew plants aeroponically using vapor at the plants’ roots to deliver nutrients. The types of plants that were used early on included coffee and avocado plants. It wasn’t until 1980, that this new method of growing would be developed into what was coined as “aeroponics”.

Aeroponics systems are actually quite simple and uses very little water and no soil. “The Land” pavilion at Disney’s Epcot Center opened in 1982 showcasing an aeroponic system.

A chamber containing the water-based solutions is used to promote healthy growth in the plants. Water is pumped from the reservoir into the mirco-jet nozzles which distribute the nutrient solution to the roots at programmable intervals. This is an enclosed system, meaning whatever doesn’t get absorbed by the roots falls back down into the solution chamber and gets cycled through again.

A hydro-atomized spray provides the roots with the right amount of moisture to stimulate the plant growth. The pump pushes the solution through a pipe that atomizes the solution and sprays a fine fog directly onto the roots. The pump is set to an automatic timer and delivers this high-powered nutrient solution at regular intervals.

Hydroponics and aeroponics can be combined to produce strong and healthy plants called hydro-aeroponics.

Aeroponics as an Urban Farming Solution

For urban farmers, urban dwellers, restaurants, grocery stores, businesses, and even offices, aeroponics makes sense. Aeroponics uses the minimum amount of input to gain the maximum output. Using no soil and little water there are many advantages and benefits to aeroponic systems. As a zero-waste system, aeroponics answers many of the concerns growers have regarding lost resources. It’s clear that aeroponics is becoming the solution to filling the growing need to conserve water and energy, as well as healthy food systems especially in the city and high density populations. You can experience the benefits of aeroponics for yourself with personal indoor gardening systems like the AeroGarden.