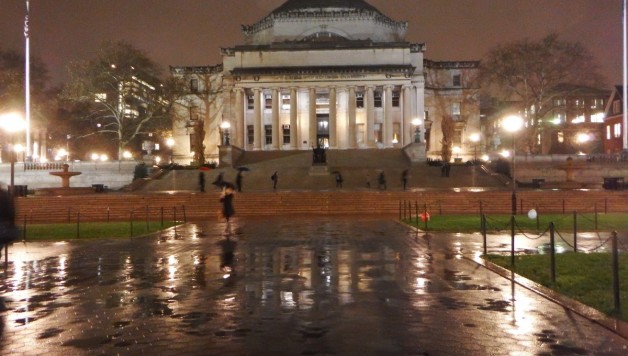 The workshop began in the typical meet and greet fashion, with wide-eyed participants unaware of what laid in store for them, while enthusiastic volunteers from Blue Planet Environmental made for a distinctly separate crowd. Minutes after the initial welcome from Henry Gordon Smith, founder of Agritecture, the part in the crowd dissolved with experts speaking casually with newcomers. The camaraderie grew faster than the microgreen salads served up at the front table, courtesy of Stonebridge Farm in upstate New York.

A urban agriculture workshop is a welcome oasis to the normal hustle and bustle of the Big City. The typical sprawling stressful atmosphere was nowhere to be found. A diverse crowd in attendance offered an intriguing depth of conversation, as students and pros from all walks of life were preparing for the next day’s main event. Each of the three teams consisted of architects, professional growers, marketing experts, engineers, entrepreneurs, and various students from the greater NYC area interested in the many aspects of a sustainable business and urban agriculture.  This introduction period ended quickly but the discussions afterwards went on later into the night. By this time the three teams were busy at work.

The torrential downpours of late autumn could do little to stifle the three groups as they worked diligently throughout the day. With several international guests in attendance there were rare moments of idle time. Each of the three teams had assembled an amazing presentation, covering the initial capital investment required, details of the location and issues therein, as well as what would be grown, what services would be offered, and even how long of a turn-around before the design became profitable.

With the respectable cast of judges ready to hear the presentations, Dickson Despommier, Professor Emeritus at Columbus University, and author of The Vertical Farm (an amazing read, pioneering the art and science of urban agriculture and growing up, rather than out) spoke briefly on the principles outlined in his book. Taking the established practice of a rooftop garden, an art-form existing since the Hanging Gardens of Babylon, and “moving it inside, to each level of an existing structure” we’re able to recycle the abandoned warehouses and factories that dot our urban centers, artifacts of the industrial revolution, and feed entire cities. Professor Despommier was, and is ahead of his time, and I predict in the next decade, the practice of vertical agriculture is going to become commonplace to meet the growing demand for fresh greens in even the densest metropolitan areas.

Team One, AKA “Team Rock ‘N’ Grow” planned to revitalize the disaster stricken Greater Rockaway area of Long Island struggling to recover from Hurricane Sandy. Working with various aid packages through the Governor’s office and with local support, Rock ‘N’ Grow planned to breathe new life into an inundated parcel of land in a considerable food desert within a relatively low income area.

Working with local developers and community councils would quickly pay off, as the plot would be transformed from an unusable and undesirable marshy fen to a community center and public garden, equipped with a storm-water absorbing catchment zone of native species that thrive on the mixture of brackish and salty water that surges into the area during significant storms. Permaculture techniques would be employed to sustainably maintain the storm barriers and ensure productivity despite any of nature’s harsh interventions.

The facility itself would house considerable hydroponic and aquaponic apparatus, churning out nearly 250 tons of kale, leafy greens, and culinary herbs to the surrounding area and major boroughs of NYC. The team estimated that more than 30% of the sales would be made locally through the community, providing much needed nutrition as well as fresh and delicious produce within the neighborhood. As an added benefit the 1500 square foot aquaponic farm would provide wholesome tilapia year round, reducing the demand for processed and frozen fish in local restaurants.

The real benefit to the community, aside from the 25 full-time jobs, would stem from the community center and farmer’s market designed and run by the local populous that would be constructed on the ground floor of the building. Providing seasonal produce through a system of community outreach soil-based farms, the locals would have a once-in-a-lifetime opportunity to take part in the growing of their own food, an uncommon blessing in the low to middle class neighborhoods surrounding New York.

Team Two, who was fortunate enough to work with a representative of the grocery delivery giant Fresh Direct, had also planned a waterfront community oasis. The primary focus of the “Mott Haven Fresh” design revolved around the hotly contested placement of a shipping warehouse for Fresh Direct, yielding a massive footprint and rather ominous corporate presence in any local neighborhood, the residents wanted nothing to do with a new distribution center down the block. Mott Haven Fresh’s master plan involved renovating and abandoned lot on the Bronx Kill River and placing the 500,000sq. foot distribution center underground, below a 100,000 square foot greenhouse, community park, and public bike path.

While the semi-trucks came and went directly to the freeway, unhindered by local traffic, the residents of the surrounding community reaped the benefits of 2.5 million pounds of fresh produce, learning centers, rolling green parks with storm-mitigating bioswales, and more than 50 jobs on-site. The team motto, “Parks, not Parking Lots” rang true to the classroom of NY natives and the design was exceedingly well-met. The design was made even sweeter by the use of phytoremdiation techniques to purify local run-off that would have otherwise dumped various waste products from the surrounding industry into the river, one of the worst-polluted in the metropolitan area.

Team Grid Farm Park Revitalization From the Ground up

Team Three, “Grid Farm Park”, was perhaps the most ambitious of the three teams, working within the densest industrial parks of the Greater NYC Area, they sought to repurpose an abandoned petroleum storage tank site. Under normal circumstances, remediation of this site would cost several million dollars. The top meter of soil would need to be dredged, shipped out for decontamination and purified while the lot is refilled and leveled with soil from out of the area. Additional testing and monitoring of the soil would also need to take place over several decades to ensure that no additional contaminants threaten the ground water supply. Through their ingenious plan working with their contacts at National Grid, the current owner of the plot, they planned an advanced phytoremediation system that would cleanse the soil over the next 10 years, costing less than $3.00 per square foot on the 100,000 square foot property.

While the various perennial species work to rejuvenate the soil, an impressive array of hundreds of greenhouses would grow anything from tomatoes and zucchini to herbs and leafy greens year-round. The crowning jewel upon the property would be the geodesic dome-shaped greenhouse visible from the nearby highway that would house a miniature botanical paradise and learning center.

Grid-Farm Park was by far the largest and most ambitious plan that had been demonstrated during the presentation.

Upon completion of the presentations, the judges filed from the room to debate the victor. While the groups smirked and boasted to one another about their triumphs and shortcomings the rest of us waiting on the edge of our seats. Upon returning the verdict was announced. Team 3, Grid Farm Park had received an honorable mention and second place for the creative use of an otherwise forsaken plot of oil-stained land. Taking first place, however, was Team 2, “Mott Haven Fresh” for their integration of Fresh Direct’s shipping warehouse into a sustainable and profitable next-gen urban farm. The champions of the night had received the honor of knowing that their design prowess had impressed the experts, in addition to a monogrammed Associaton for Vertical Farming planner, and a place forever enshrined on Agritecture.com.

After the winners were announced and proper recognition was given, an informal discussion arose from the usual Q & A that follows this sort of event. A latecomer to the event introduced himself from the corner of the room and fired a debate that I feel has yet to be concluded. Rune Kongshaug, Architect and founder of Produktif, asked “how do you measure happiness?” Before you dive into the deeper meanings of your own lives, he was talking about the happiness of plants; is it simply the yield shorn from the stalks at the end of the season, or is there something deeper, another facet of cultivation that is too-often disregarded?

Similar to the bar-jokes, each individual expert had put forward their own version of a ‘happy’ plant. Those extolling the virtues of hydroponic systems argued that the ideal growing medium delivering nutrients to the roots and a full leafy crown made them the happiest. Vertical farmers responded that the happiest plants were those that grew most efficiently. An aquaponics enthusiast explained the necessity of balance and precision monitoring of the equipment led to the happiest plants. Those influenced by corporate farming quipped that the happiest plants were those with a buyer. Playing devil’s advocate, Mr. Kongshaug brought up the one point that had been bothering me since the get-go, “What of the soil?”

As if the land itself were an outdated relic of farming-gone-by, the suggestion was met with equal parts puzzled looks and professional chuckles. “Soil profile is only important in grapes for wine!” was the chief and initial response. With the acknowledgement that the soil imparted a fingerprint onto the wine itself, couldn’t you also argue that our lettuce and artichokes could benefit from a unique flavor all their own?

Based on the success of the initial Agritecture workshop, a second event has been planned in Las Vegas later this year. Keep an eye on Henry and Agritecture for all the latest updates and news in the world of urban vertical agriculture. 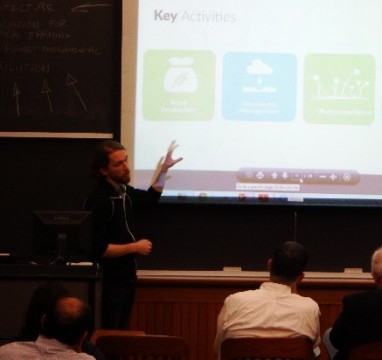 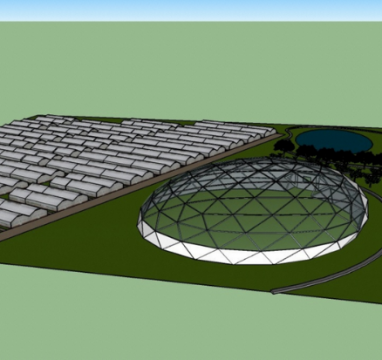 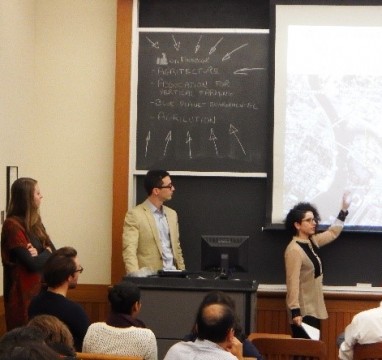 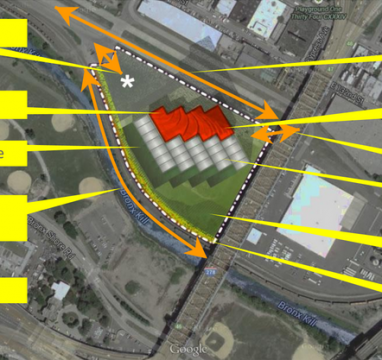 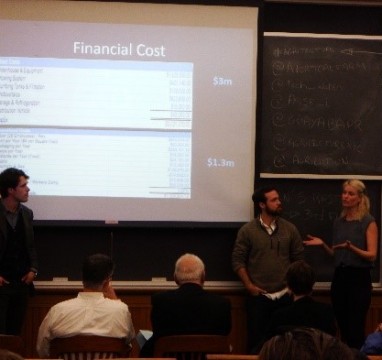 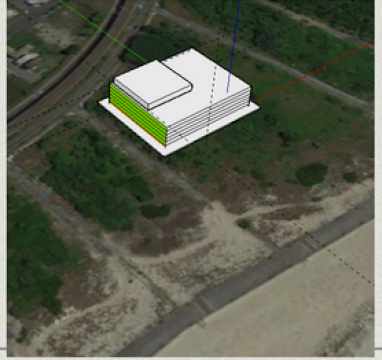 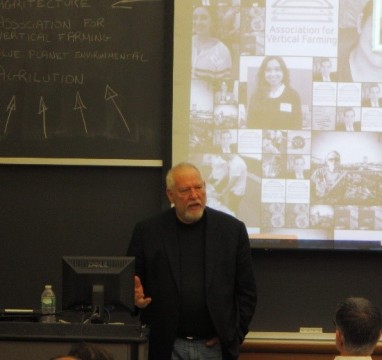 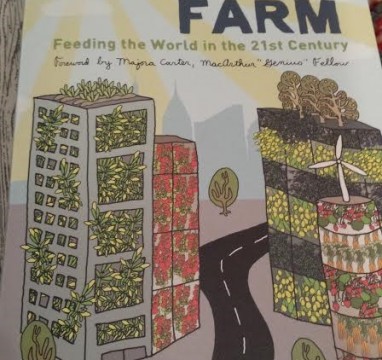 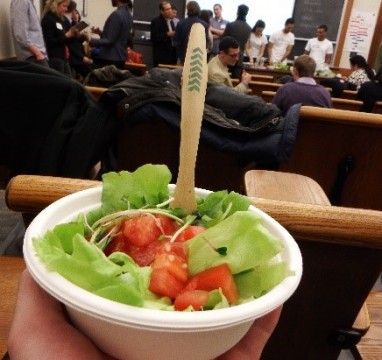 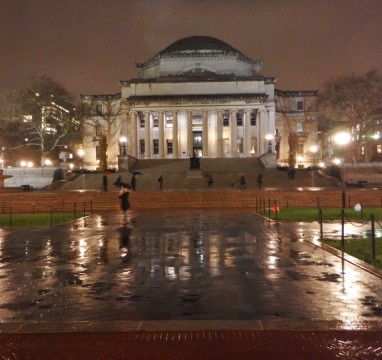 I believe the happiest plants are those which are grown naturally under the wide open sun, crowns to the sun and roots reaching deep into the earthy soil. The happiness of a plant can be seen if you look long enough, rapid growth, deep colorful leaves, and a taste as individual as a personality. I understand the argument that we’ve hit the upper limit of traditional monocultural farming practices, you can’t feed a city with fields alone, but farther and farther from the metropolises you and I continue to rely on factory-farmed produce clones. Farming does not need to rest in the hands of corporate giants. As this workshop clearly demonstrates the next generation is ready to work side-by-side with the community to grow “up” to meet the demands of the urban centers. Become a part of it today, grow some microgreens on your window sill, if they don’t taste any better right off the bat, the pride in doing it yourself certainly will. – Tom